A guitarist, composer and arranger of amazing skill and breadth.

Orange Mountain Music, Philip Glass’s record label, was founded in 2001 as an outlet for Mr. Glass’s archival and out-of-print recordings. But the label quickly began releasing Mr. Glass’s new works as well, and before long it was releasing discs by musicians in Mr. Glass’s ensemble and young composers who had caught his ear.

The latest on the arts, coverage of live events, critical reviews, multimedia extravaganzas and much more. Join the discussion.

The label presented a few of its recent finds at Le Poisson Rouge on Sunday evening. Though Mr. Glass was present, he neither spoke nor performed, nor was any of his music played: the cellist Wendy Sutter was scheduled to play his “Songs and Poems” but withdrew because of illness.

The opening set was devoted to a suite from Trevor Gureckis’s soundtrack for “Les Adieux,” a score for piano, violin, cello and flute. Mr. Gureckis works as Mr. Glass’s musical assistant, but his boss’s influence is scarce: the three movements he offered here are built on mildly angular, light-textured piano themes, with the flute and string lines weaving intricate counterpoint around them. This is music with a Gallic urbanity, even in passages where the piano figures have an almost Webernian quality.

The guitarist and composer Joel Harrison was to have presented chamber works he is recording for the label, but those would also have required Ms. Sutter. So instead Mr. Harrison convened the Fojoto String Band, an improvisatory collaboration with Tony Trischka, the banjo player, and Foday Musa Suso, a virtuoso on the kora, an African string instrument that looks like a lute and sounds like a harp.

Mr. Harrison described the group’s music as African, Appalachian jazz, and that seemed about right. When Mr. Suso and Mr. Trischka provided the starting points for the ensemble’s extended explorations, they each drew on traditional styles and specific configurations associated with their instruments, yet when they played together, they created a texture so unified that it was often hard to separate them.

Mr. Harrison’s contributions, on acoustic and electric guitars, stood apart more clearly and often provided the impulse for the ensemble to shift directions and balances.

The trio was joined by the composer, pianist and percussionist Mick Rossi, who played a dumbek (a Middle Eastern drum) in most of the improvisations, and by the saxophonist Andy Laster and the percussionist Charles Descarfino for the wonderfully idiosyncratic arrangement of John Coltrane’s “Chasin’ the Trane” that closed the set.

Mr. Rossi was ostensibly on hand to promote his new recording, “Songs From the Broken Land.” But he played only one piece from that collection of solo piano works, the energetic, Bartokian “Lockdown.” He devoted the rest of his set to his appealingly supple jazz compositions, for an ensemble in which he was joined by Mr. Laster, Mr. Descarfino, Russ Johnson on trumpet and Kermit Driscoll on double bass.

Reading an interesting discussion on Nate Chinen’s blog, I added this comment:

I want to briefly weigh in with a quote from a recent article on Jazz composition I wrote for Chamber Music America Magazine: “We are arguably in the midst of radical changes, driven not by one defining genius but by many forward-thinking individuals all working at once. What I find interesting these days is not so much how people are soloing- it’s the new materials they’re being fed.” The materials that the most interesting composers are using today…the force that motivates the improv…it’s changing, growing at pretty great speeds. To me the single overriding factor in discussions about the identity of jazz is this: jazz is a set of practices that can be used in any context with any motivating set of notes and rhythms to work from. Many people today are finding extravagantly diverse building blocks for jazz music. It could be no other way. Those who invented jazz endowed it with qualities that embrace all serious comers, no matter whether they want to color their sound with Indian music or Rock n’ Roll. There are those who believe that jazz is a set of TRADITIONS- well yes, but it’s more and many of the least interesting musicians of the year seem bound by tradition. As always the most interesting music turns tradition on its head without at all abandoning it. Joel Harrison

High Note release generally prove reliably mainstream; this one has more bite. The placid cover pic of the Hudson and predictable title don’t prepare for the energy released by this crack nonet. END_OF_DOCUMENT_TOKEN_TO_BE_REPLACED

Urban Myths is an exciting and innovative modern jazz record by New York based guitarist Joel Harrison. Accompanied by some of the idiom’s leading musicians, including Christian Howes, violin; Daniel Kelly, keyboards; Stephan Crumb, bass; Jordan Person, drums; and the ever brilliant David Binney on alto sax, Harrison delivers an album that blurs the boundaries separating jazz, rock and funk in an experimental and highly enjoyable fashion. While fusing musical genres has long been a popular custom in the jazz world, Harrison presents a unique approach to the realm of jazz fusion. His highly developed rhythmic sense, alongside his ability to write convincing melody lines, allows Harrison to present an album that pushes boundaries without isolating the audience. END_OF_DOCUMENT_TOKEN_TO_BE_REPLACED

Last night I saw Youssou N’Dour at BAM. It was one of the most emotional musical experiences of my life. It made me feel awe (again) at the undeniable, sublime power of music. His voice, and the phenomenal band he uses, penetrated me to the core. It got me thinking… END_OF_DOCUMENT_TOKEN_TO_BE_REPLACED

So I did a tour with guitarist Joel Harrison about 6 or 7 years ago (as a sub for Kai Eckhardt).  The sheet music got lost in the mail & I was at that point in my development in which I was good but didn’t have a lot of things together that I should have (inexperienced really).  Listening to the music, I figured, “well.. I’ll be ok, sounds really interesting but like it won’t be too hard to sight-read, play, etc…”.  MAN!!  I got my a## handed to me on that tour!  The caliber at which Joel and the company he keeps operates is consistently high and his music is demanding, intense and beautiful all at once.  That was a very important turning point for me and my playing..  I learned a lot on that tour about the work I still had to do.  That said, I was very excited to hear of his new CD and just had to share it with you guys… END_OF_DOCUMENT_TOKEN_TO_BE_REPLACED

the feeling when as a 17 year old his solo cd came out, and my musician friends and I sat dumbfounded listening to Donna Lee- it was a once in a lifetime moment- and then I saw him with Weather Report in 1976. The sight and sound of him playing Purple Haze still resonates.  He is to the electric bass what Hendrix was to the electric guitar. END_OF_DOCUMENT_TOKEN_TO_BE_REPLACED

Can someone tell me why jazz  bands always get asked to do an encore in Europe but rarely in the US. It really is a good feeling (even if they are pretending in Europe, which I trust they are not)

Nels Cline’s new solo cd lays down the gauntlet. Any solo record is a devilish endeavor. Really hard to do. But he’s inspired me…someday, in the not too distant future (before 2012 I swear) END_OF_DOCUMENT_TOKEN_TO_BE_REPLACED 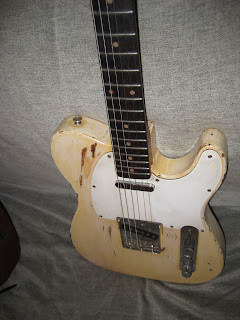 This is one of the most magnificent guitars ever made. The bridge pick up is warm and full enough for any kind of jazz, while the neck pick up screams bloody murder when you step on it. It is tremendously beat up, looking like it was left in a barn for 12 years. I had Flip Scipio refret it. This Telly is simple, direct, subtle if need be yet warlike too. I have used it on bar gigs for Blues and Country for which it has no parallel. I also did some slide work on Passing Train, trying to give it a pedal steel sound. I’ve used it for solo jazz pieces. What I can’t really do on it is play with the type of facility that I have on a Gibson. The shape of the neck, and the scale make it a little harder for me to get around, so it is left at home for a lot of hard core jazz gigs. I grew up in Washington D.C. with Danny Gatton as a huge influence. Everytime I pick up my Telly I think of him.

This is my first blog! My first issue is this- I welcome anybody’s success stories vis a vis their usage of blogs, facebook, myspace, etc. I am told, by wise people, that these platforms, and all the time they take away from other pursuits, will help my career. While I am sure that some have found these virtual community-builders useful, I personally find them a little ridiculous, so far. I know what actual community feels like, and it is physical, having nothing to do with staring at a screen. The possible exception is myspace, where people can at least listen to my music, which is a good thing. END_OF_DOCUMENT_TOKEN_TO_BE_REPLACED